It all started with a passion...

Since 1992, the parent company of SkiTravelGroup, SkiGroup A/S, has helped send thousands of happy skiing tourists to the snow-covered Alps, so the time has come to recount how the journey started. Because we do actually kind of think that SkiGroup is a travelling fairy tale. And it has certainly been incredible to take part in the journey. And it has not even ended yet...!

In 1992, Lars Hjarnø Nielsen saw an opportunity of arranging bus trips to Austria with his fellow student Anders. Højmark Rejser was created, named after the local area where everything started. In those years, Danish skiing tourism was in its infancy. In the beginning, the target group consisted of large school groups. Lars and Anders handled sales, planning and bus transport themselves! And yes, they even acted as guides when the guests arrived at the hotels and pistes. The working hours were never counted, because they were driven by a passion: the opportunity to go skiing themselves!

And what started as a passion grew to a bigger and bigger business. Up through the nineties, the clientele was expanded to include Danish families. Still with focus on Austria, primarily Salzburgerland. Along the way, the buses were supplemented with driving holidays and air travel. In 1997, Højmark Rejser purchased the Danish ski travel agency OK Rejser, who had Italy on the programme in addition to Austria. In 2006, they purchased another Danish ski travel provider, Winther Rejser. After this, the travel concepts of OK Rejser as well as Winther Rejser were included in Højmark Rejser.

In 2004, they saw the market potential in arranging inexpensive family skiing trips and the travel agency ClickSki saw the day of light. The Scandinavian expansion really took off in 2005, where they entered the Swedish ski travel market, and in 2008, Højmark Rejser took over Lion Alpin in Sweden. The expansion continued in 2011 through the purchase of the life style-oriented ski travel agency Team Benns Ski.

As a continuously growing group of travel agencies, they needed a gathering and leading organisation in 2011: SkiGroup was founded, and since then, it has been the front figure of a ski travel group with large growth ambitions and most of all a fundamental passion for snow, which guarantees a ski travel concept beyond the usual.

With a desire to get closer to our business partners, we took another large step in 2014 in connection with the establishment of a subsidiary in Switzerland. SkiTravelGroup AG is the technical organiser and producer of the holidays provided in Denmark, Sweden and Norway through our travel agencies. Furthermore, it is also the beginning of travel sale in new markets in Germany, the Netherlands, Belgium, the Czech Republic etc. under the name Lion Alpin.

But at SkiGroup, we do not rest on our laurels…
We, i.e. the approx. 30 employees working at the headquarters of SkiGroup in Ringkøbing, at Lion Alpin in Gothenburg or at our subsidiary in Switzerland, consisting of travel consultants, marketing, sales, guide manager, purchasing and accounting – but also the more than one hundred loyal employees of our business partners at the travel destinations as well as one the way to them – ALL enjoy telling people far and wide – and not without some pride – that we are members of the ”SkiGroup family”.

Saying this puts us under an obligation. It is similar to swearing a kind of Musketeer oath: One for all – and ALL for SkiGroup. Herein lies maybe the entire secret behind the success of SkiGroup as Scandinavia's largest ski travel agency. We will go through fire and water – and snow! – in order for our guests to be able to count on us as a serious travel provider in the future as well.

Lars Hjarnø Nielsen, chairman of the board. 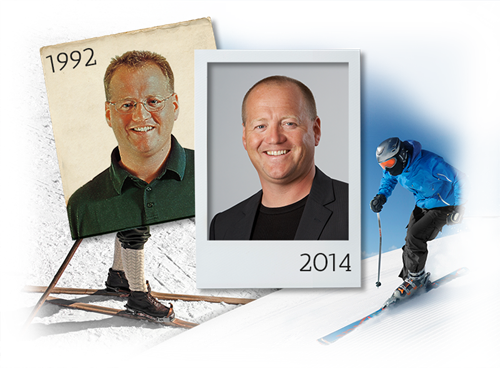